The State Economic Development Expenditures Database blog series begins today and marks the release of the updated database. Over the next several weeks, the Council for Community and Economic Research (C2ER) will be releasing blogs that highlight important findings from the latest update. The database serves as the premier tool for researchers to easily access, explore, and analyze economic development spending at the state level with the data directly hand extracted from each state’s governor’s recommended budget. The database is updated on an annual basis and is available here to all subscribers and C2ER members.

With the passage of the Inflation Reduction Act (IRA) at the close end of one of the hottest summers on record, particular focus is being paid to environmental sustainability efforts across the country. As the green sector of America’s economy continues to grow, states have increased investment into environmentally focused economic development. Starting in 2016 with the signing of the Paris Climate accords, total spending has risen from $48 million in funding to a peak of $475 million in 2022. That almost 10-fold increase in spending was originally spurred by funds outside General Fund and Federal Assistance. Only in more recent years are states starting to shift and dedicate more General Fund spending to green initiatives as states begin to rely less on other funding sources. In calculating state investment on environmental economic development, CREC analyzed state level spending on direct investment to green businesses, workforce support and retraining for jobs in the green economy, and support for industrial revitalization. These economic development programs are almost always focused on firms or employers. 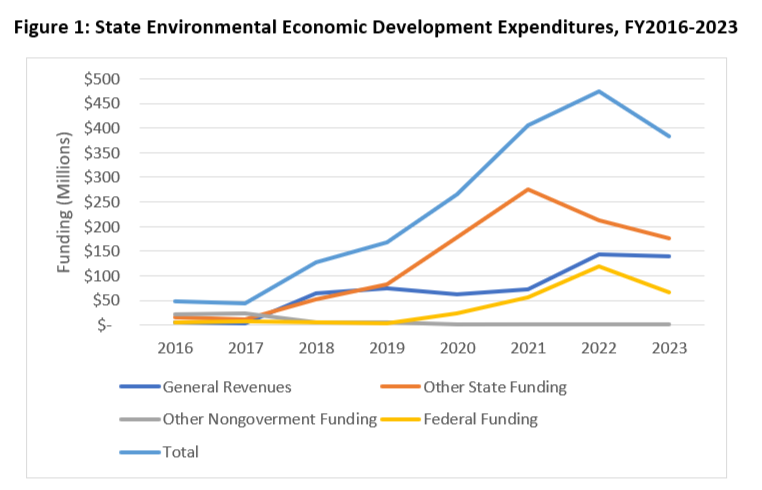 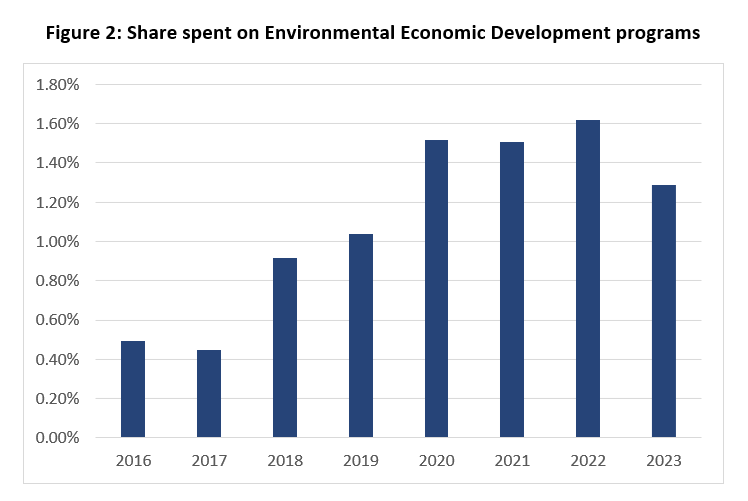 The five states that spent the most on environmental economic development were Kansas, Hawaii, Pennsylvania, New Jersey, and Ohio. Of these, Ohio had the largest increase in investment between FY2021 and FY2023 while Kansas had the largest overall investment, despite a slight dip in investment in recent years. Environmental economic development spending is concentrated into just a few types of programs in these top five states. The largest spenders, Kansas and Hawaii, have concentrated spending into single large programs that cover a wide variety of objectives, while the other three states primarily invest in environmental cleanup. This includes hazardous waste, industrial site preparation, and brownfield programs that aim to revitalize previously harmed land to be retooled to serve both the economic development and environmental interest of the state.

Kansas’ budgetary expenditure on environmental economic development can be found it its Division of Environment, which is housed under the state’s Department of Health and Environment. The program handles traditional environmental cleaning and upkeep as well as green industry permitting, research and development assistance, and a focus on providing funding to support the local water supply. While there is currently a 12% funding decrease planned between FY2022 and FY2023, the main driver of that decrease is a decline in federal assistance. Despite this reduction of federal help, the state still shows strong support for the program by committing to more state level investment. The governor of Kansas has proposed a roughly 1500% funding increase to the program from the general fund bringing the general fund expenditure on the division from $4 million to $69 million. The shift to a reliance on state level funds over time reflects the general trend.

Hawaii’s Green Infrastructure Authority is the primary green economic development program. The program, constituted in 2014, vastly increased in state funding support between FY2018 and FY2020. The objective as stated by the authority is to use these funds to help expand the clean energy through market driven approaches with the goal of 100% renewable portfolio standard in the electricity sector by 2045. Products and services offered by the Authority include direct loans for eligible energy improvements to homeowners, small businesses and project sponsors, and the Green Energy Money $aver On-Bill Program which provides financing for green energy projects to be paid back through the ratepayer’s utility bill. While not having marked additional money for the program in the state’s latest budget, the state has held constant its funding at $86 million. Even without additional funding, the program itself has been financially successful for the state’s goals. As of December 2019, the state had exceeded its original financing goal by almost double, for a total of $49 million in financing.