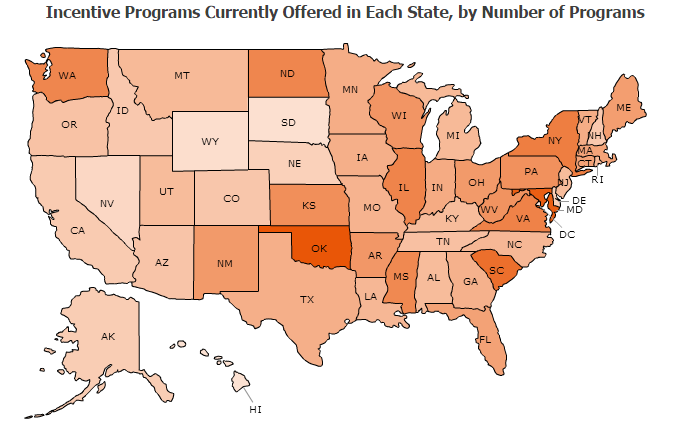 Also of note, seven of the expiring incentives are for energy efficiency or renewable fuels programs such as the Illinois Solar and Wind Energy Rebate Program and the New York On-Site Wind Turbine Incentive Program.

In a blog post from earlier this year, C2ER’s research manager concluded that the small proportion of new tax-based incentives “supports the growing impression that state investment strategies are gradually moving away from tax based incentives”.

C2ER does significant research to identify changes to existing incentive programs. The North Carolina and California film credit programs offer two great examples of how incentives can change from year-to-year.

The North Carolina legislature failed to renew a number of incentives, including subsidies for film and television production, solar energy, and historic preservation. Some lawmakers are pressuring the governor to extend the legislative session in the hopes of passing economic development legislation.

According to the State Business Incentives Database, North Carolina provides a tax credit equal to up to 25% on in-state spending for goods, services, and labor. If the incentive is allowed to expire, a program which offered $61 million in incentives last year becomes a $10 million grant in 2015.

While the North Carolina credits are in limbo, the California legislature has passed a bill to greatly expand its film and television production incentive. The bill was passed by the California Senate and Assembly and is expected to be signed by Governor Brown. The California incentive will expand credits to $330 million per year over five years and expand the geographic availability of credits.

C2ER will continue to watch these programs for any developments. Users can continue to count on the State Business Incentives Database for accurate and up-to-date information on new and existing programs.